For Dr. Parry, there’s plenty to love about the world of dentistry and the care he provides to guests. He’s passionate about the synergy of art and science and its ultimate end goal: improving the appearance and function of smiles. He believes that oral healthcare is a very personal experience at its core, and his entire team follows that principle! If you’d like to learn more about his credentials and background, just keep reading below.

Why Did You Decide to Become a Dentist? 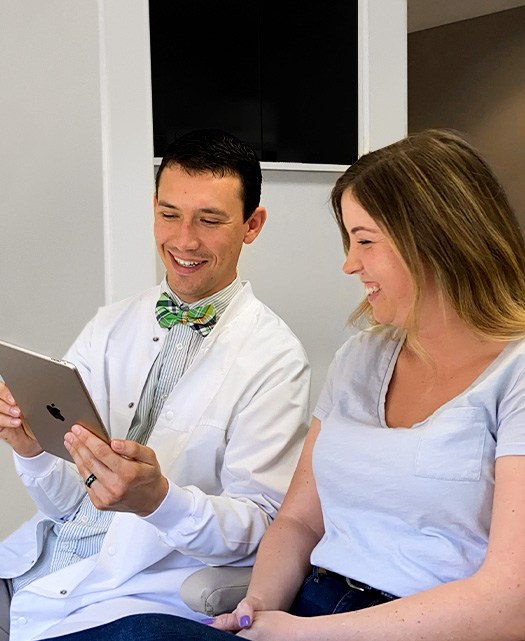 Ever since he can remember, Dr. Parry has been interested in medicine and the arts. While growing up, he went back and forth between medical school and studying architecture/interior design. At one point, he decided to start observing various physicians at work. One of his first experiences was with a clearly overbooked physician who didn’t have more than three to four minutes to spend with guests or their family members, even when they were experiencing traumatic events. He realized that he wanted a more uplifting job where he wouldn’t have to be so rushed that he couldn’t even treat people like people. He wanted to provide care and compassion and essentially treat his guests like they were members of his own family instead.

After observing several types of medical professionals, Dr. Parry’s friend recommended that he shadow a dentist – and everything clicked into place. He loved right away that dentists had the ability to get to know their guests and provide high-quality care in the ideal environment. All these years later, he's still certain that he made the right choice!

Where Did You Study Dentistry? 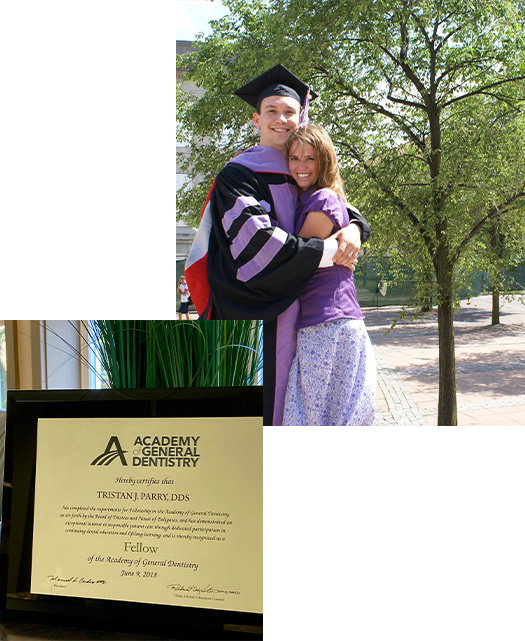 Today, Dr. Parry is a Fellow in the Academy of General Dentistry, which is an honor that less than 7% of general dentists in the United States ever accomplish. He is also a graduate of the prestigious Kois Center in Seattle, WA, which only 14 general dentists in all of North Carolina can claim! So far, he has completed 500+ hours of advanced training in a number of different specialties, including conscious sedation, restorative/implant dentistry, cosmetic dentistry, orthodontics, and more under the instruction of some of the most well-respected and experienced clinicians in the profession.

He additionally is a peer reviewer for General Dentistry, an editorial for The Academy of General Dentistry. Thousands of dentists across the nation refer to this source to keep their skills up to date. Other accolades and distinctions include:

Dr. Parry loves providing mentorship to other dentists regarding clinical procedures, dental office systems, personnel management, and efficiency protocols for their practices. He has deeply enjoyed the opportunity to help many doctors and their teams in over 25 different dental offices across multiple states. He is also an Advisory Circle Member of the American Dental Association, which helps hundreds of thousands of dentists across the nation in product selection and implementation.

Outside of the Dental Office, What Do You Like to Do? 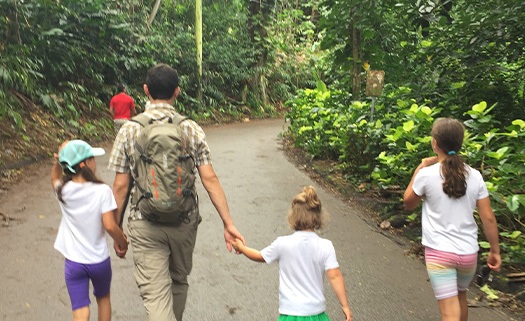 Dr. Parry met his wonderful wife Liz in college, and they were married in 2006. She truly makes their house into a home with her ability to find joy in life and look for the positive in all things. If you ever get a chance to try one of her homemade pies, don’t pass it up! They’re a little slice of heaven on earth. Together, they have three beautiful daughters. Kalia is their academic who will read anything she can find, while Amalyn is their ball of perpetual energy. Finally, there’s Lexi, who is the self-proclaimed princess of the family.

The final members of the Parry family are their special cats. Sheba and Persia were adopted in 2016 from a local shelter, while Rocco (a Bengal) was adopted as a rescue animal. They’ve also been known to house Poison Dart Frogs from time to time – but don’t worry! They aren’t toxic in captivity, even though they’re still brightly colored.

Outside of working hours, Dr. Parry and his wife are passionate about traveling. It doesn’t have to be some exotic foreign location, either – natural wonders can be found everywhere, from waterfalls to forests to waterways! They love doing pretty much anything outdoors, including camping, hiking, downhill mountain bike racing, zip lining, canoeing, kayaking, and so much more. They also take plenty of time to explore the history of areas they visit.

As for personal hobbies, Dr. Parry enjoys playing the ukulele and listening to traditional Hawaiian music – his wife can even dance the Hula! He’s also a lover of the arts, an avid board game collector, a pop culture aficionado, a bit of a nerd (he is a dentist, after all), and a gardener. Nothing beats home-grown fruits and vegetables straight from the garden/orchard! Next up on his list is to become an apiarist or someone who raises bees. What could be better than honey straight from the source?

Ultimately, whatever Dr. Parry’s wife and kids want to do becomes a hobby for him as well. Life is short, and spending time with those closest to him is the best hobby he could ever have.